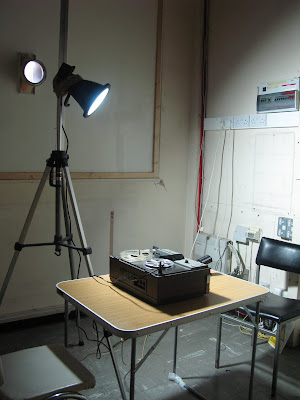 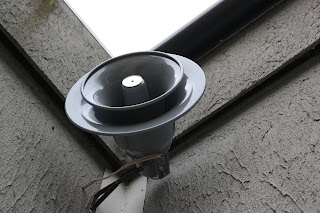 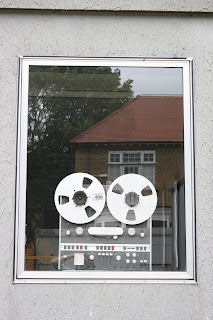 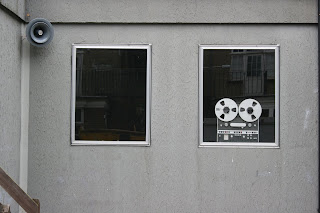 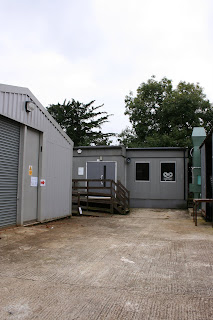 In Need of Servicing, Earn £10 Now 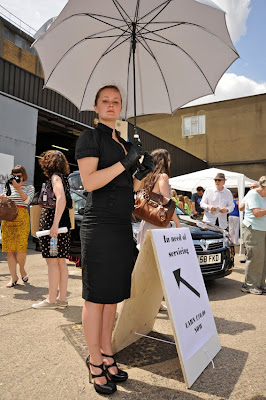 I paid people £10 to tell me that they love me.
I invited people to sit in the passenger seat, while I sat in the drivers seat. We closed the doors. I pressed record on a Dictaphone. And I said “I’m ready, tell me that you love me.....”
Only one rule applied: they had to sound like they really meant it.

M and F in 'collaboration' 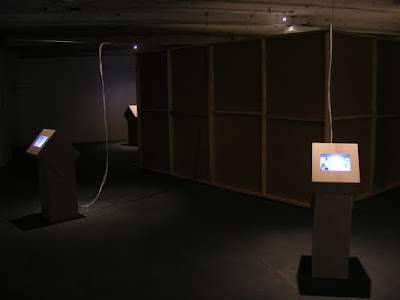 M and F in ‘collaboration’ (Faye calls Mark to discuss the power relationships occurring during the project. Faye records the conversation without informing Mark).

M and F in 'collaboration 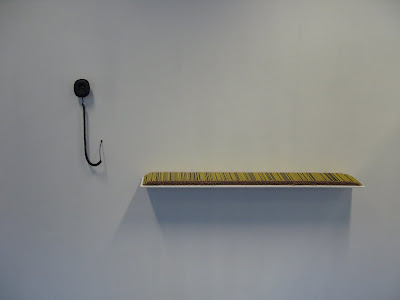 Staedtler Noris pencils sharpened with a knife and a sound recording of the action. 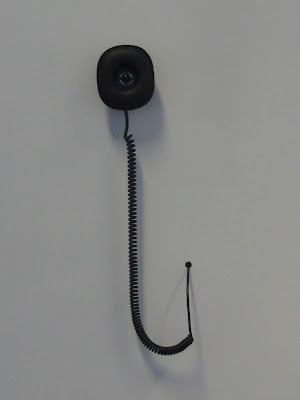 An audience member will press one ear against the headphone to listen to the sound, thereby creating a quiet intimate way of listening.

I stood by a telephone box in Newcastle city centre.
I asked people passing by to go into the phone box, press record on a Dictaphone and record a list of people who they miss.
After recording the work I carried the Dictaphone directly to the private view, placed it on a table and the Dictaphone was there for the duration of the exhibition. Visitors could press play and listen to the voices. 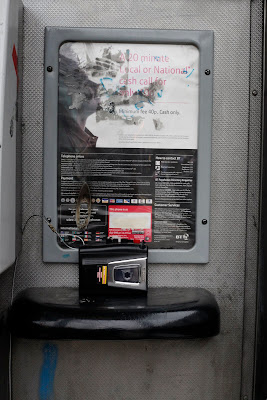 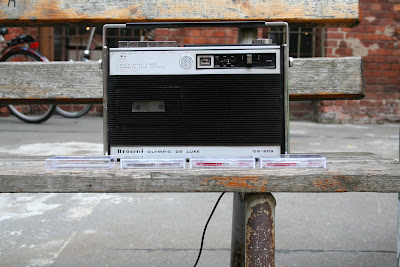 
This work was a result of a bet with another artist Patrick Coyle. We bet that we would go to Berlin and make one participatory project each. We would invite each of our participants to a private view. We wanted to test them, to find out if they cared about what they had been a part of.
The winner would be the artist with the most participants there at the private view.
None of Patrick’s participants came.
One of mine did.
He is a salesman, he sells City Safari’s.

I was interested in collecting the voices that people might recognise from walking through Berlin, market stall sellers, newspaper vendors, waitresses etc. These people have to repeat themselves constantly. The repetition that often occurs in labour interests me and so I sought to record people working, but specifically people who have to repeat what they say. We think that we hear these people’s true voices, we think that we hear a snippet of them. But when you have to say something repeatedly your voice becomes monotonous, it’s your work voice. An engineered voice which comes as a result of certain jobs.

I walked through the city and asked people if I could record them whilst they worked. I would attach a microphone to their lapel and leave them for two hours. I approached and asked dozens of people. Most said no, seven said yes. In this way, it became my job to repeat myself also.
Once I had collected the sound, I transferred each voice onto a series of 4 cassette tapes. The repetitive nature of all of my actions was exaggerated by increasing the number of processes behind the production of the tapes and the actions involved in the performance at the private view.
I brought 7 old portable cassette players whilst I was in Berlin finding participants. Each of the 7 voices had their own tape player, with a series of four tapes in front of it. The voices were unedited, each person’s two hours of sound was played in full during the performance. The act of putting the tape into the tape player, pressing play, listening, rewinding, taking the tape out, putting a new tape in became the performance.
I was interested in the sounds that were generated by pressing the buttons, rewinding the tape and walking between the tape players. This repetitive action reflected the form of labour that I was commenting upon, but it also functioned as an indicator for the audience of the importance of the process which I undertook in collecting these voices. Producing and presenting them in this way was designed to pull the audience back into the reality of the objects. Through highlighting the difference between the real people and the sound of their voices, whilst also acknowledging the impossible struggle to capture the essence of those involved, a departure from the work into the subjective imagination of the audience was sought.

KOMME
Curated by Naomi Pearce
‘And so it was that the two decided to try their powers upon an unknowing traveller, deciding to see which of them could soonest strip him of his cloak.’ [1]
KOMME is an invitation, a collaboration harnessing participatory performance-based practices to examine the internal structures of the ‘art world’. Over the course of one week, during Art Forum Berlin, curator Naomi Pearce and artists Faye Peacock and Patrick Coyle travel through the city asking members of the art establishment and the public to attend two private views, at ÏMA Design Village.
Working independently each artist will enlist members of the public to attend a private view held on the last evening of their stay in the city. These interactions form the basis of the work created and eventually exhibited at the private view. Whilst the artists are fulfilling their role of making work, Naomi Pearce fulfils her responsibilities as curator and visits Art Forum Berlin in order to meet, advertise and invite as many members of the ‘art world’ to a champagne reception also held at ÏMA Design Village, on the same evening, overlooking the artists' private view.
In harnessing the private view as an integral stage for the exhibiting process, a means by which success is gauged and an opportunity for opposing artistic factions to collide, KOMME reflects upon an event that is a microcosm of the art world; an arena in which its internal structures and politics are exposed.
Patrick Coyle’s intuitive approach to his interactive performances directly contradicts the laboured objects he produces during the event. Often producing obsessively precise visual poetry, the result veers from whimsical ramblings to surreal contemplations. For KOMME, Coyle invites individuals to pose with him in photo-booths around Berlin. His notes written on the developed photos concerning the sitter and his relationship to them will be revealed at the private view. Participants hear Coyle’s comments upon their time together only if they attend the private view at the end of the week.
Central to Faye Peacock’s practice is an acknowledged impossible struggle to capture the ‘truth’ or essence of the people she involves in her performances. The voices she collects are mere snippets of personalities; a person edited down to a sound bite; fragments in time, fixed in a moment of history, captured on a reel of tape. For this project Peacock produces sound work formed from conversations and voices harvested from her interactions with the public.
Coyle and Peacock’s contrasting approach to a public audience and the distinct manner in which their interactions are manifest invite a discussion around performative practices concerning temporality, the ethics of social engagement and the physicality of an art work. The hierarchical system ‘KOMME’ constructs explores the process of manipulation and voyeurism that is arguably inherent in the process of producing and experiencing a performative work. It is hoped that in creating a dialogue around the extent to which these mechanisms alter the understanding of art works, some re-evaluation of individual roles can occur.
________________________________________
[1] The Parable of the North Wind and Sun 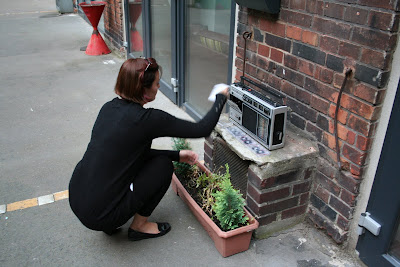 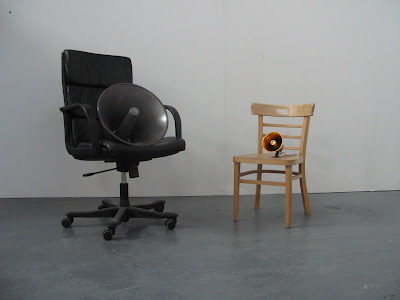 'Please Record a List of People Who You Miss'


I stood by a telephone box in Camberwell, South East London.
I asked passers by to go into the phone box, press record on a Dictaphone and record a list of people who they miss.
Originally recorded as part of Camberwell Live Art Festival and exhibited in Istanbul as part of Turkeys first Sound Art festival, ctrl_alt_del 2007-2008. 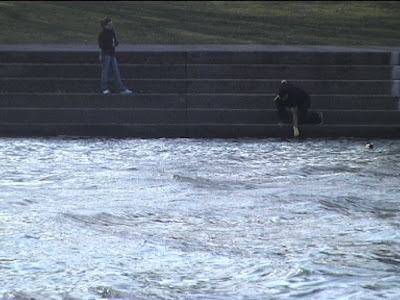 Graft comissioned this site specific project, which was exhibited as part of the Sensetive Skin festival, Bonington Gallery, Nottingham, 2007.
On April 2nd 2007 in invited this passer by to move 100 cups of water, two paces back upstream.
I paid Vijay £1.00p for each cup that he moved. 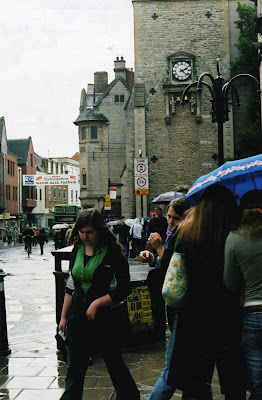 This photograph shows Carfax tower, it was taken in Oxford city centre.
I visited oxford as a way of getting my audience member to compare his life as child, growing up in Oxford, to his life now; here in Nottingham.
I acquired this information about his life secretly and asked him to meet me in the old market square, Nottingham (the equivalent meeting place to Carfax tower, shown in the picture).
I gave him an envelope, all that was inside was the picture shown above.
Taken on whistle stop trip to oxford.
Just for him. 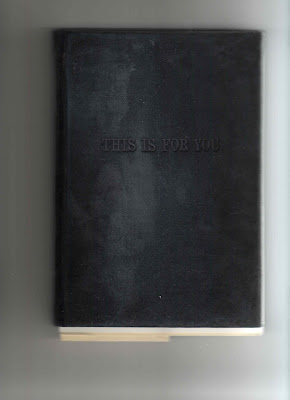 I chose my sister because I knew that she would be painfully honest.
After only a few meetings she was bored and I was left to make a piece of work 'for her'.

Please follow the list of instructions (normally, I would meet you to talk you through this process):

• I want you to write a list of your top seven pleasures.
Things that you do to cheer you up, if ever you feel down.
Small or large.
This is your list of pleasures.
Your ‘Adult Pleasure Events List’


• Nobody will ever see your list… so please, write freely.


• Now that you have complied your list, I ask you to apply each pleasure to a day over the next seven days.


• You should do the thing allocated for each day, on that day.

'This One's for You' 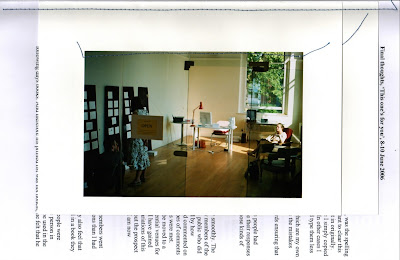 The above photograph shows the room where I sat for three days.
Six books were made over the course of the three days (written by the audience… produced by myself).
One of those books is included along with this portfolio (entitled; “This one’s for you.”).

The other things that I asked people to write about (in the five books not included) were: lists of the things which people disliked about their lives, a list of their top seven pleasures, descriptions of their neighbours, descriptions of their everyday lives and their current list of things that they need to do.
When each person produced a piece of writing (a list or a description) they were given a completed book in exchange.

It was in this way that I started with one book and through a process of exchange I ended up with six. 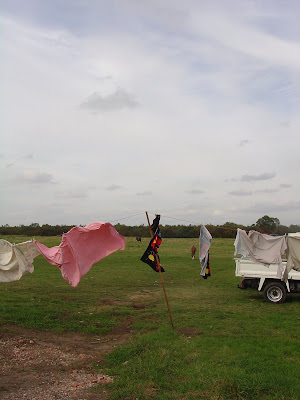 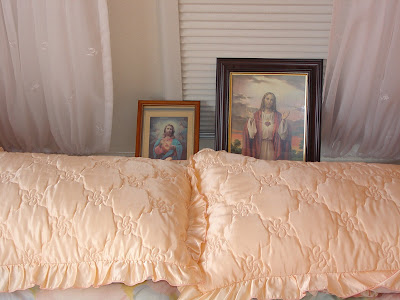 These images are from the short time that I spent interviewing Vicky, a traveller who lives on one of the largest traveller sites in Europe. I also produced a short film which Vicky used at confrences for representing the community and their issues. 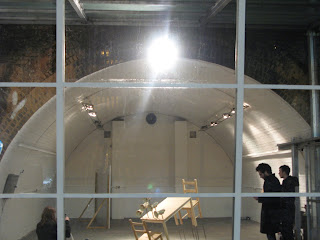 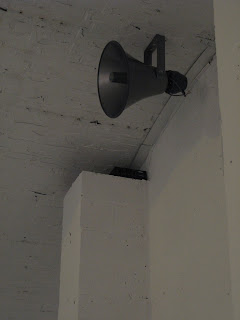 
The large grey tannoy was fixed to the far back centre point of the gallery, at the top of the wall.
Every fifteen minutes the mans voice would repeat the words "No-one's died, gone away, everything's fine" three times.
It was very loud and demanded the audiences attention.
The sound was recorded in Camberwell, as part of my street performance, for Camberwell Live Art Festival, 2007.
Home
Subscribe to: Posts (Atom)